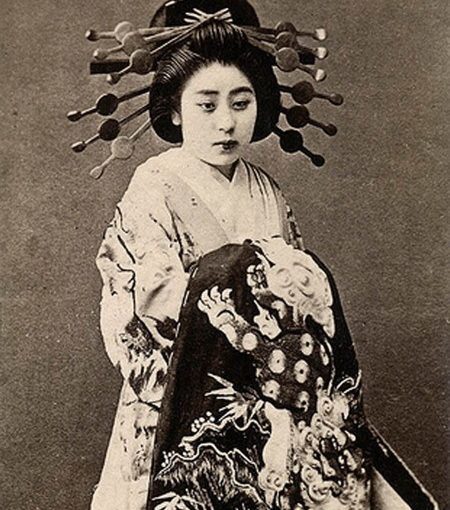 Ohashi sold herself to a brothel to support her impoverished family after her samurai father lost his position. She served diligently and became a poet and calligrapher, but she was plagued by sadness for her former life. Later she met Hakuin, who advised her that enlightenment was possible in any circumstance. He gave her the koan “Who is it that does this work?”

Ohashi was terrified by lightning. One day, during a violent thunderstorm, she sat zazen on the veranda of the brothel in order to face her fear. A bolt of lightning struck the ground in front of her. She fainted, and when she awoke, she saw the world in an entirely new way. Hakuin later certified her enlightenment.

Ohashi was eventually ransomed from the brothel by one of her patrons, Isso, and they were married. Later, with Isso’s permission, she became a nun and was renowned for her wisdom and compassion. After Ohashi’s death, instead of making the customary memorial tablet, Isso had a statue of Kannon carved in Ohashi’s likeness and donated it to Hakuin’s temple.

From: “The Hidden Lamp”

So many pointers in this koan:

One of the questions asked by a 15 year old boy in my sexuality for teens class at Clouds in Water was: Why is prostitution illegal? Wow, gulp, how do you answer that without falling on either the side that says sex is an evil thing and dangerous, or the other side of supposed “freedom”, that anything you want to do is okay. We began with what I would consider to be the obvious answers.   Prostitution is exploitation of less empowered people and that there are real dangers both to the prostitute and the client. As far back as the 15th century when there was a syphilis epidemic, “whoring” was considered more and more dangerous. In modern times, there is still the worry of STD’S and the danger of dealing in a criminalized world.

Going a little deeper, we also explored the economic reasons that a women or man would sell their sexual bodies. This is exposed in this particular koan. In the koan, Ohashi sells herself to a brothel and that is presented as a self-less act, a sacrifice to provide money for her impoverished family. The economic factor is often true or always (?) true even today. This is a different side of the “badness” of prostitution. Buddhism suggests that we aren’t all good or all bad. We are a mix of choices and decision made from within and without. The perpetrator was once a victim; the victim can easily turn into a perpetrator. So we must see the bigger picture of people’s circumstances before we judge.

In class, we studied the history of prostitution, which some call the oldest profession. In the beginning in the ancient near east, there was so-called “sacred prostitution”. Sex was done in shrines to various deities with a lot of spiritual ritual around it. Beginning as a sacred act, prostitution has a range that goes all the way to the opposite end of the spectrum, to what they called “lie down” prostitutes in Greece. This is more like a street-walker. You could meet a women or boy on the street and just lie down and have sex right there on the street or in the alley or under the bridge.

Looking at the causes of our sexual attitudes today, there is so much precedence for our confusion over sex and sexual values. In my study of history I found this outrageous sentence:

Wow, from a twenty-first century viewpoint, that sentence is inconceivable.

The legality of prostitution over the centuries started after the Roman Empire and ran the gamut of regulation. Sometimes, prostitution on certain streets was legal or they allowed prostitution outside of the city limits.   In the United States, laws against prostitution began to be made along with prohibition. Prostitution was considered part of the drug and alcohol trade and became an illegal act.

The most hard-hitting discussion with the youth was the long-standing activity of sex slaves. In the ancient days, most prostitution was done with slaves, harems, or people you “own” for that purpose. Often these slaves were immigrants or brought on ships specifically for this purpose. In history, this had many names. The Yellow slave traffic from Asia including Chinese and Japanese people and the White slave traffic from continental Europe, which was mostly people exported to service British soldiers around the world. More recently in WWII, Japan forced an estimated 200,000 women from China and Korea to become “comfort women” to Japanese soldiers in China. To this day, all over the world, people are fighting and concerned with sex trafficking.

Ohashi got out of prostitution by being lifted out of her economic circumstances through marriage. She was also encouraged and supported in her humanity by Hakuin who advised her “anyone can become free.”   I hope we can emulate Hakuin’s egalitarianism. That being said, we need to address the issue of survival and poverty for this freedom to have any reality. But or And, the admonition that all people, regardless of their circumstances, are Buddha and can realize it, is a fundamental belief in Buddhism.