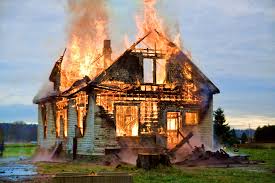 This is my version of one of the sentences in the One Bright Jewel fascicle:

Who can hold unconstructed reality and not participate in bits and pieces?  The only thing we can do is completely penetrate each moment that arises through our sense gates.

Our life depends on our attitude towards each of these moments.  Uchiyama Roshi said, “Everything we encounter is our life.  And each moment becomes a burning house or a boundless stupa depending on our attitude.”

This image of the burning house is from the Lotus Sutra.  Everyone is inside the burning house and playing with the toys of this life and their stories.  But the house is burning down! Get out! Get out! Buddha is enticing people to get out of the house. He has fine carriages and carts to take us to a new place.  If our attitude is from the broad view and perspective of the teaching, then each moment becomes a boundless stupa instead of a burning house.  We can see the one bright jewel in all phenomena and that makes it a boundless stupa.  We can see that it connects with all ten directions. This interconnection is its boundlessness.  Sometimes, this boundless stupa is called a seamless monument.  There is no seam between buddha-nature and the object of the moment.  The absolute and relative truths are completely and seamlessly co-arising.

This brings into the fascicle the koan, BCR 18, National Teachers Chung’s Seamless Monument.  In particularly, the verse of this koan is referred to by Dogen.  Here is BCR 18’s verse:

South of Sho and North of Tan

In between there’s gold sufficient to a nation.

Beneath the shadowless tree, the community ferryboat

Within the crystal palace, there’s no one who knows.

Dogen is trying to find images that reflect the unity of the opposites without losing the twoness of these pairings.  Sho and Tan are rivers that made up at some point in China’s history, the boundaries of China.  So between the two rivers is the same land and that land is the whole of China.  It is similar to saying, north of the South Pole and south of the North Pole, is what?  The whole world and it is One World.  The whole world is the gold that is sufficient to a nation.  Spiritually speaking,  our spiritual understanding is sweet nectar that is sufficient to fill us completely up.  The shadowless tree is an example of eternity and the community ferryboat is a reference to the mutual support of sangha to carry us across to the other shore as in the Heart Sutra.

This seamless monument neither connects nor separates.  It is not one, not two. No one understands it and in a way it is useless.  Like the admonition from Uchiyama Roshi who says, “Zazen is useless.”  There is nothing to gain.  Nothing happens on the path.  There is no transformation and yet everything is different. There is no one who knows is similar to the question in the fascicle, How can I understand it?  We can’t understand it and yet we continue to investigate.  The question is the path.

Dogen tries to find images that help bring forth not one, not two.  South of Sho and north of Tan is one image.  Another one in this fascicle is:

Again, Dogen tries to turn upside-down some previous buddhist phrases.  One koan expresses that one foot of water or essence produces a fathom or 6 feet of wave or samsaric confusion.  Dogen then, turns this around and says the contradiction. One side is not preferred or more important than the other.  Dogen says form equals emptiness; and form is form and emptiness is emptiness.  Ten feet of jewel has ten feet of brightness.  One foot of water has one foot of wave. Same and equal yet retaining the difference of water and wave.

Often when reading Dogen, we just have to laugh, right?  He transposes things. He reverses meaning, sometimes even in the same sentence.  He goes backwards and forwards and upside down in the same paragraph.  He is beseeching us not to hold onto one view as the “right” one.  All the views are expressing the different facets of the jewel itself.  As it says in the text, one day he speaks from the side of emptiness, the next day from the side of form.  All to help the student loosen up their attachment to “sides”.  We all end up nodding and laughing. We have to practice with a sense of humor because its impossible to understand this. We will never land, permanently, in the correct view which is all our egos really want.  And so we laugh.

I’d like to add one more view on attachment.  I seem to feel attached and I also see in others, an attachment to One Bright Jewel.  We all “like” that a bright jewel is beautiful.  We could, in the name of non-attachment, just as easily use a phrase like “One brown piece of dung” for this phrase of teaching.  Not too much attachment there, unless you are a fly.  It is like the famous koan,  “What is buddha?  a shit stick or in modern vernacular, toilet paper.”  No high or low, No beautiful or ugly, No form or emptiness.  Every object arising in the moment IS “it” regardless of our evaluation.  But, practically speaking, it is probably better to use some sacred language around it like “One Bright Jewel” rather than some vulgarity.  But the vulgar use of “shit” does shock us out of our misunderstanding of non-duality and our attachments.

In many koans, we use ordinary objects to show the one bright jewel.  What is buddha?  – the price of rice, a cypress tree, a jelly doughnut, a sesame cake, turnips, and three pounds of hemp, etc.  So too, in this fascicle, Dogen says,

How many pieces of “what is the use of understanding” are there? Tentatively, we should say seven milk cakes and five vegetable cakes.

Each object we encounter in our so-called ordinary life IS the one bright jewel. And as Katagiri Roshi always said,  This moment is the universe.