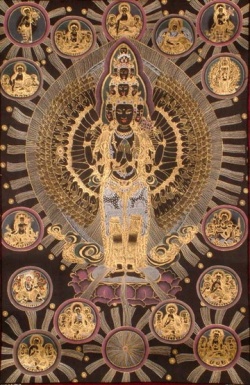 In the classical Buddhist teaching, there are 52 stages in the development of a Buddha or a Bodhisattva. That’s a lot of stages! Dogen in his subtle analysis however isn’t that interested in stages! He does not believe in what he sometimes calls “stepladder Zen”. This is because of his understanding of time and his insistence that every moment is practice-realization. Realization or enlightenment does not happen in the future, which strictly speaking, doesn’t exist and is a figment of our imagination. There is no other place or time besides this very moment. The idea of development is part of our conception of time, our stories and our thinking.

For the sake of teaching and communication, we say that there is a developmental, linear time, which we understand very well in consensus reality. We are born. We have a childhood, adolescence, adulthood, old age and a time of dying. Or we can use an example of a plant. A plant has a seed, grows through the sun and water and right conditions, turns into a tree, has a flower and fruits. We also know that an oak seed does not turn into a elm tree. We understand this through our understanding of cause and effect.

But Dogen adds an understanding of time that is much deeper than our conceptualization of a life span. He adds that at every moment the karma of the moment, the conditions of the moment, meets the source or eternal energy. This he calls the dharma position. In each dharma position, the one bright jewel or the source energy is present. As Katagiri Roshi always said, “Is a kindergartener less important than a person with a PHD? They are in different parts of their life but their essence is the same and equal.” Each has a dharma position in the now. 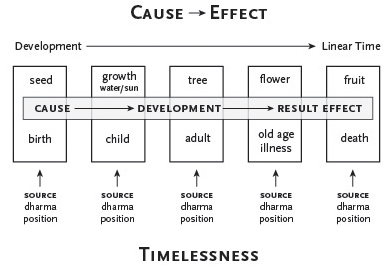 So we can extrapolate that these 52 positions in the development of a bodhisattva are also like this. They have a certain linear logic and we can’t deny development, but at the same time, each one is a dharma position. Dogen says then that in each dharma position you can be liberated and you can go beyond Buddha. 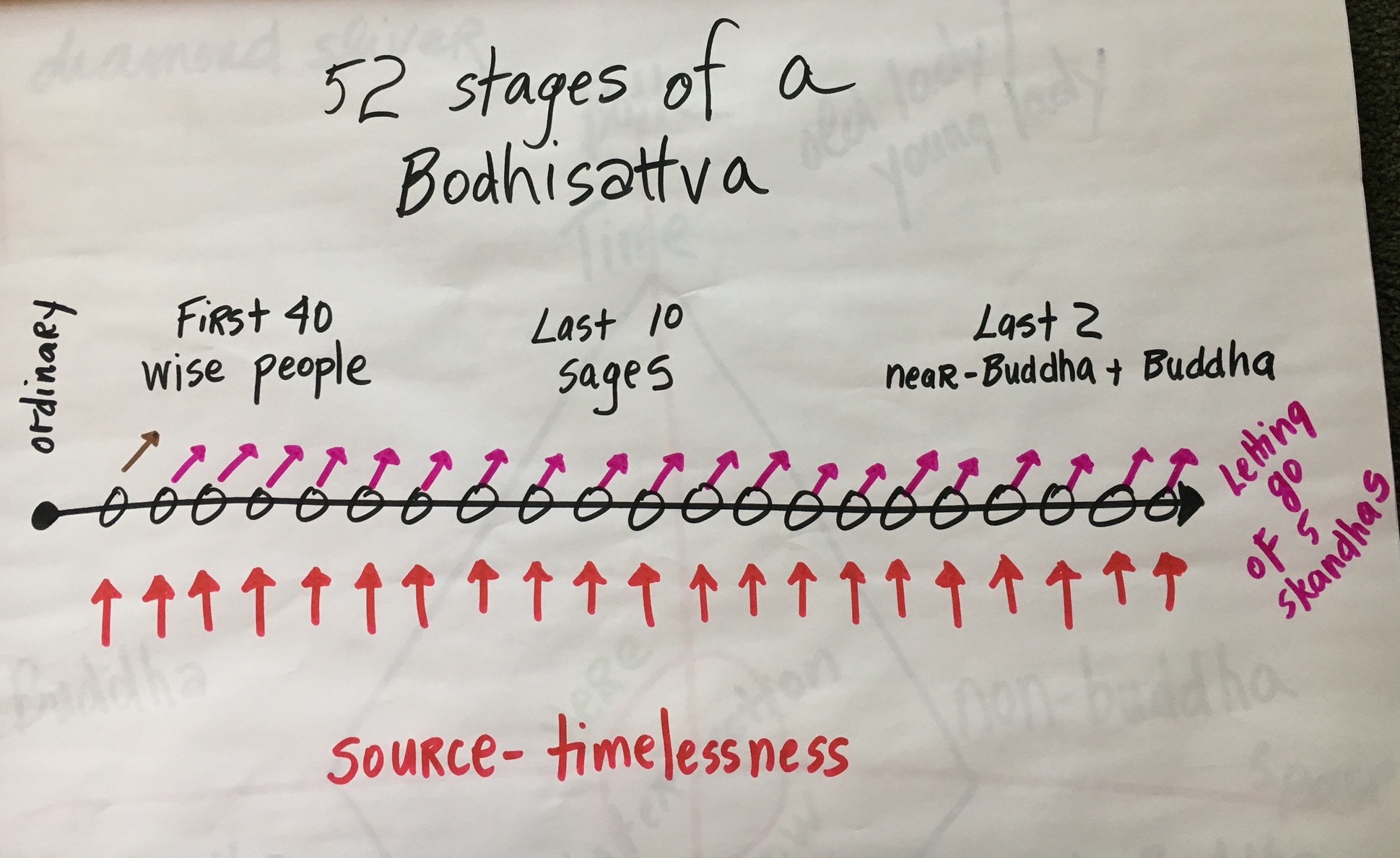 In each stage of the 52 stages, Dogen is asking us to go “beyond” which means to drop off our self-centered thinking and truly become the moment. That is enlightenment – complete awareness and presence in the moment. This “going beyond” is represented in the chart above by the arrows above each stage and going toward the upper right in purple. The arrows below each stage in red are the source expressing itself in each moment and indicates the dharma position.

In our ordinary way of thinking we would say “going beyond Buddha” is going off the horizontal line, continuing off the page to the right. After total enlightenment, the 52nd stage, we would keep going. Where? Dogen doesn’t interpret the development this way. He says in each stage and in each moment, we have to go beyond.

Even Buddha really didn’t stop at anuttara-samyak-sambodhi, the 52nd stage. After Buddha was enlightened, he developed all of his teaching, the 8-fold path, and continued teaching for another 60 years. He took awareness into each moment of his life – continuous presence.

Dogen writes in this fascicle:

“Further; there is something we should say: that it is not the case that the thousand so-called sages or thousand wise people do not exist. Even though there are wise people and sages, ‘the path of going beyond’ is not the realm of wise people or sages.”

The wise people are in the first 40 stages and the sages are in the final 10 stages of the 52 stages of development. Dogen is saying that “going beyond Buddha” is something that can happen in every moment, no matter what so-called stage you are in.

Just for fun though, here are the compartmental stages of becoming a bodhisattva:

Dogen is very deliberately talking about a PATH and not a DESTINATION. Buddha also talked about a path – the eight-fold path.

Without annihilating the stages of our life, we can still uphold each stage as enlightenment itself. We can learn to see the essence or suchness in each moment that underlies the condition or appearance. Letting go of our thinking and language, we can enter into the suchness of the moment and in doing so, we can experience freedom or what we call liberation. This is what Dogen would call “going beyond Buddha.”