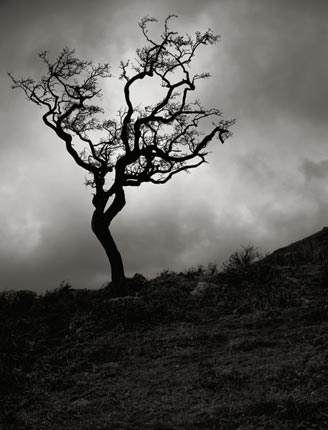 An old woman built a hermitage for a monk and supported him for twenty years. One day, to test the extent of the monk’s enlightenment and understanding, she sent a young, beautiful, girl to the hut with orders to embrace him. When the girl embraced the monk and asked, “How is this?” He replied stiffly, “A withered tree among frozen rocks; not a trace of warmth for three winters.” Hearing of the monk’s response, the old woman grabbed a stick, went to the hermitage, beat him and chased him out of the hut. She then put the hermitage to the torch and burned it to the ground.

Zenkei Blanche Hartman wrote about this koan in “The Hidden Lamp.” She said that having few desires doesn’t mean suppressing our humanness. Instead of shutting us down, we should develop through Zen practice, more gratitude, more appreciation and more aliveness for life. Zen’s expression is not a withering of our perceptions, but a movement towards a deeper appreciation of life.

“The practice is not about suppressing desire or destroying our humanity but about allowing it to flow out to everything rather than to a particular object…. I understand the precepts not as rules to follow, but more as ‘Be very careful in this area of human life because there’s a lot of suffering there, so pay attention to what you’re doing.’ Like a sign on a frozen pond that says, ‘Danger, thin ice,’ rather than, ‘shame on you.’”

Brother David Steindl-Rast, a Benedictine monk was once questioned about his celibacy. He answered, “Well if I want to love everyone the same, I have to be either celibate or very promiscuous!”

That’s a fun response. According to our circumstance, we face the red thread of passion between our legs with different attitudes. All of us, no matter what are situation is, have to face our natural sexual response and make peace with it. We are admonished in Buddhism to come to terms with our sexuality in a wholesome way according to the circumstances of our life. “Danger, thin ice!” is acknowledging the power of sexuality and because of its innate power, its ability to harm people including ourselves.

Aiken Roshi tells a story about a women coming to him for a face-to-face meeting. She was wearing very revealing clothing. A crop top shirt with her midriff and the tops of her breasts exposed. Aiken Roshi just shook his head and said, “Look, I’m a man and I have natural responses. Please leave and come back to the interview with proper clothes on. What you are wearing is inappropriate to the dokusan room.”

Zenkei Blanche Hartman said the response of the monk could have been quite similar to Aiken’s response. She said maybe it could have been something like: “You are young and beautiful and very attractive, but I’m a celibate monk, so I’m really sorry, but I can’t accommodate you.” This would have taken into consideration the feelings of a young, beautiful women getting rejected.

Ikkyu’s, the wild Zen master of the 15th century response was:

“If a beautiful girl were to embrace this monk, my withered willow branch would spring straight up.”