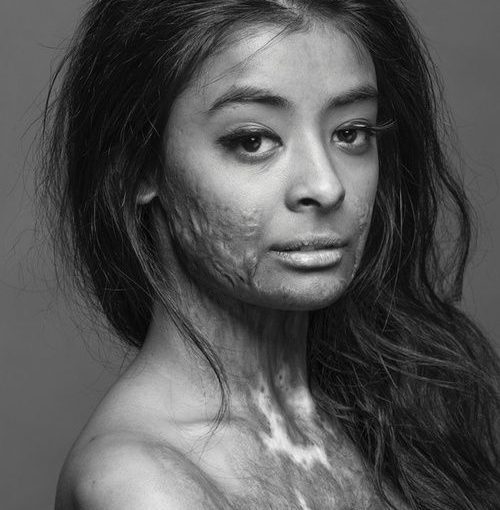 As a young women, Ryonen Genso was an attendant to the empress and was known for her beauty and intelligence. When the empress died, she felt the impermanence of life, and she decided to become a nun.

Ryonen traveled to the city of Edo in search of a Zen teacher. The first teacher refused her because of her beauty. Then she asked Master Hakuo Dotai, who also refused her. He could see her sincere intention, but he too said that her womanly appearance would cause problems for the monks in his monastery.

Afterward, she saw some women pressing fabric, and she took up a hot iron and held it against her face, scarring herself. Then she wrote this poem on the back of a small mirror:

To serve my empress, I burned incense to perfume my exquisite clothes.
Now as a homeless mendicant I burn my face to enter a Zen temple.
The four seasons flow naturally like this,
Who is this now in the midst of these changes?

She returned to Hakuo and gave him the poem. Hakuo immediately accepted her as a disciple. She became abbess of his temple when he died and later founded her own temple. Before her death she wrote the following poem:

This is the sixty-sixth autumn I have seen.
The moon still lights my face.
Don’t ask me about the meaning of Zen teachings-
Just listen to what the pines and cedars say on a windless night.

This is an incredible story and one of the first koans about women I discovered as a young women practitioner. It affected me greatly. In many ways, it matched my ardent intent to studying Buddhism. I would do anything to know the truth. In many ways, in order to break through the illusion of the world, you have to have this type of ardency. Similar to Dazu Huike, who cut off his arm standing in front of Bodhidharma’s cave, proving his fervent desire for the dharma and for the teaching.

And yet, as a twentieth to twenty-first century women, these stories anger me. I don’t want to deal with the self-violence. Why did the two of them have to injure themselves? Why, why, why! Is that spiritual? That breaks the first precept of no violence. So in order to understand this, I have to go back to the culture at the time. Their cultures were much more intimate with blood and death. All the men carried swords. They didn’t have their meat or chicken wrapped up in cellophane in the refrigerated section of the grocery store. Every day they saw blood. Even though we might not be bloody, we all give up something to swim upstream of our culture in order to awaken to the true dharma. Religious life has many sacrifices.

Its interesting to me, that she burned her face with an iron which is a symbol of women’s works in the domestic arena. She wrote her poem on the back of a mirror. Her personal reflection in the mirror, totally transformed. Even in our culture, gender identification is still very important. In the twenty-first century, we are going through a tremendous transformation of how we identify in gender and sexuality.

This koan presses into the issue of women as objects of men’s sexual desire. Certainly the early Buddhists thought that women were dangerous to the monks. Women would arouse the men’s lust. And so, Ryokan was refused entrance to the monasteries. I will admit that I have envied beautiful women for their faces and bodies and the attention that they receive and I don’t receive. But I also see how difficult their life can be. Their identity is dominated or controlled by the projections on them by others.

These projections are committed all the time in many ways. The sexual objectification of women is so prevalent. Sexual micro-aggression is a daily occurrence. A young women in the Middle School sex class, asked, “Is there such a thing as too much self-expression?” We thought she meant – how sexy can I dress, like the music videos, before I’m “asking for trouble”? Another question presented for discussion in the class was, who is in charge of the boundaries in sex, the man or the women? Is it up to the women to slow down or stop sexual aggression as it has been in the past? We certainly have gone past the rules of the nineteenth century where the fathers and brothers would, supposedly, protect the women. But in some ways, women haven’t learned how to protect themselves yet either.  And who protects the children?  Even in the current judicial system, the women is still sometimes blamed for the sexual crime. “She was asking for it.” Yuck, just even writing that makes me cringe.

From Thich Nhat Hanh’s interpretation of the sexual precept, he writes,

“Aware of the suffering caused by sexual misconduct, I undertake to cultivate responsibility and learn ways to protect the safety and integrity of individuals, couples, families, and society. I am determined not to engage in sexual relations without love and a long- term commitment. To preserve the happiness of myself and others, I am determined to respect my commitments and the commitments of others. I will do everything in my power to protect children from sexual abuse and to prevent couples and families from being broken by sexual misconduct.”

By using Thich Nhat Hanh’s precept, I’m not necessarily endorsing his idea that lightly committed sex or sex-as-sport is entirely misuse.  Sometimes with consenting adults, sex play is okay.  What I really like about his paragraph is the emphatic nature of his call for protecting people, children, and marriages.

Even small sexual offenses often affect women a lot. One of the women practitioners at my temple told me that she was popular in high school; quite attractive and had a big bust. She said that now, as an older women, she looks back, and realizes that it was a regular occurrence to be groped all through school. She then started to cry. She still feels the affect. Recurring sexual aggression, which seemed to be fairly minor, has affected her identity and her ability to own her womanhood for her whole life.

Just this morning, I heard another story with an older women crying. Her brother had touched her breasts and laid on top of her frequently during her childhood and her mother said something like, “Boys will be boys.” She continued this morning to say that her sexual responsiveness has been a problem her whole life. She kept saying, “I forgive my brother now, but still, but still, it has deeply affected me.”

In my life, I have always carried extra body weight for sexual protection. This theme runs something like this – if I’m not that attractive, then I don’t have to worry about unwanted sexual advances. This philosophy didn’t turn out to be actually accurate but I think it does play into many factors of over-weight people. I had such a classic example of the danger of being attractive when at 28, I first got thin. My husband and I were in Hawaii and I had never before had a great body by outward standards. I celebrated by buying a crocheted bikini in the hotel store. I wore it to the beach the next day and a young man stopped to talk to me. He seemed nice and we talked for a while. He asked me if I wanted to go snorkeling. So I went in the water with my proud body and bikini and when I opened my eyes underwater, he was exposing himself. I quickly got up, went back for my towel, grabbed my belongings and went to the hotel. So there you have it. My first time out, blasted. Of course, my husband who knows me well, thought, perhaps, because of the abuse in my background, I wasn’t picking up the social/sexual cues well enough during the conversation. That could be true, but it was just another example in a long line of examples of the dangers and projection on women, particularly beautiful women, in our society.

One of the meditative techniques used in early Buddhism, primarily with the young male monks (there were no women) was when lust arose, to imagine the object of their lust stripped of skin. Just meditate on the muscles and blood and organs. To do this is not a very attractive suggestion and the lust would subside. What a strange technique developed for twenty-something men. But it does point to the fact of external appearance does stimulate the sexual reaction. I was brought up in a pornographic household where sexual attraction was only measured in your outward appearance. It’s taken me a long time to recover from that. Now I can allow my sexual response to happen because of connection and admiration for another person and because of awareness of my body sensation. It really has nothing to do with appearance. Ordinary people, not only models, are sexual beings. Owning this wonderful sexual energy of being, we have a corresponding action which is to take responsible for it.

Ryonen in her first poem writes about appearance. Once I perfumed my clothes to become more attractive. Now I burn my face to enter a monastery. Who am I when my outward appearance changes? Who am I now in the midst of these changes? She is pushing into the quintessential Zen question, “who am I?” stripped of my stories and projections.

In the west today, we don’t have to go to such extreme measures of disfigurement in response to sexism. But we still are dealing with it every day. Our culture doesn’t deeply address this, even in spite of years of feminism. We go along with the media’s interpretation of sexuality, which is very coarse. This is why for centuries there has been the admonition in the precepts. Study sexuality, Don’t misuse it.

I love the deep beauty of Ryonen’s death poem. Even though it is not specifically about sex which is the point of this blog,  It is still so beautiful, I would like to repeat it.

This is the sixty-sixth autumn I have seen.
The moon still lights my face.
Don’t ask me about the meaning of Zen teachings-
Just listen to what the pines and cedars say on a windless night.

The last line I have used as a meditation koan during zazen. What is the sound of the pines and cedars on a windless night?