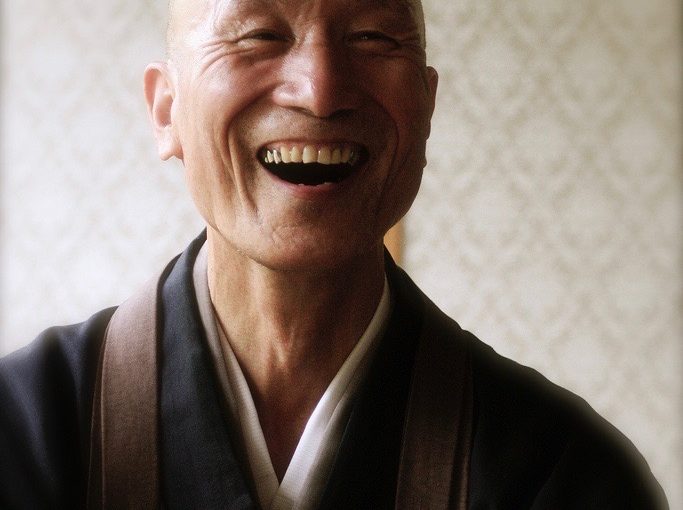 From Dogen’s “Going beyond Buddha”:

The question at hand is who originally coined the phrase “going beyond buddha”.  Some scholars think that the first person to use the expression was Chao-chou in Chinese and Joshu in Japanese who lived in 778-897.  He was slightly older but lived longer than Dongshan who lived 807-869.  There was just a small generation gap of around 25 years between them but their lives overlapped and it is hard to say which one coined this phrase “going beyond buddha”.  Dongshan didn’t start teaching until he was 40, so perhaps we can say that Joshu coined the phrase?  We don’t know, but Joshu’s koans are wonderful interpretations of what “going beyond buddha” might mean.  These koans are taken from the Recorded Saying of Joshu, translated by James Green from Shambhala.

A monk asked:  What is the fact that goes beyond Vairochana or Dharmakaya Buddha?

Joshu answered:  I am under your feet.

Monk:  Why are you under my feet?

Joshu: From the outset, you don’t know that there was a fact that went beyond Buddha.

Vairochana buddha is itself going beyond buddha.  But as I have written before, it is not something that is linear and comes after something that is before.  This moment, everywhere, nowhere and here, is at its essence “going beyond”.  If we don’t use our discriminative mind, Vairochana buddha appears always right now, right here.  This is how “here” becomes interpreted as “under your feet.”  “Not knowing” is also essential to becoming completely one with Vairochana Buddha.  We don’t use our minds to get there.  By completely being under our own feet, by completely being ourselves, by completely being who we are, we are one with Vairochana Buddha and we  “go beyond” any idea, name, concept, and limitation we might set on Buddha.  We own the life that is happening right now and through-our-own-bodies, we are connected to every other body.

Monk:  What sort of person is it that “goes beyond Buddha?”

Joshu:  Anyone who is leading an ox and plowing the field.

Oh boy, this is not what we expect to hear.  We never thought the answer would be the farmer who is going beyond buddha.  The farmer is not a person who is exotic or exalted.   Farmers are just like me.  The farmer is a  regular being who works hard everyday.  He or she cultivates the land and plants the field and they don’t know what the outcome will be.  Will there be a drought, a hurricane, or an infestation of bugs that will destroy everything they have worked for?  At the moment of planting, the farmer just plants.  We work for the harvest in the future but don’t know what we will actually harvest.  We do the work of the day without knowing if there will be anything to gain.  The farmer knows what to do every season but does not know the outcome.  The farmer does this year after year because it is what he does.  The past and the future are cut off in the moment of hard work.  This is the same structure as Bodhisattva practice.  We are completely ourselves, doing what we do, with nothing added.  That is “going beyond Buddha”, especially the “nothing added” part.

A monk asked, What is a person that goes beyond Buddha?

Joshu came down from his seat, looked the monk up and down, and then said:

This fellows is just this tall.  He probably can be cut into three pieces.  What upper and lower parts are you asking about?

Joshu was Nansen’s disciple.  Nansen was the master who is famous for the koan of cutting the cat in two (or so the myth goes) and showing to his assembly that divided the world into two, destroys the world and kills the cat.  Going beyond buddha is seeing the world in each moment as a Whole,  nothing divided.  There is no upper body or lower body.  There is no sacred which is better than ordinary. Going beyond buddha sees the mundane world and the invisible world mutually working together and therefore we have gone beyond any ideas of a “sacred buddha” or something that transcends life.  Again and again, Dogen is trying to show us the very simple idea that right here, right now, is “it”!  There is no linear progression of before and beyond.  There is no development of this is better than that.  There is “no” development “within” the development and growth of our karmic bodies.  As Katagiri Roshi used to say,  “The kindergartener has no less essence than the PHD professor.”  Perhaps this is what is meant by discovering “going beyond buddha” through-the-body.  We are not trying to escape our karma or our life by “going beyond buddha” or even becoming a saintly buddha.  Through our body, our karma, our problems and our joys, we can feel the buddha within and without.  If we know that there is no “going beyond” then we have gone beyond buddha.

A Monk asked:  What is the fact that goes beyond buddha?

Joshu clapped his hands and laughed.

Again and again, this is not a matter of understanding, discriminitive thinking or philosophy.  Right here, right now, in this clapping, we have the whole of it.  And our searching for it is extremely funny.

Dogen writes in another poem: