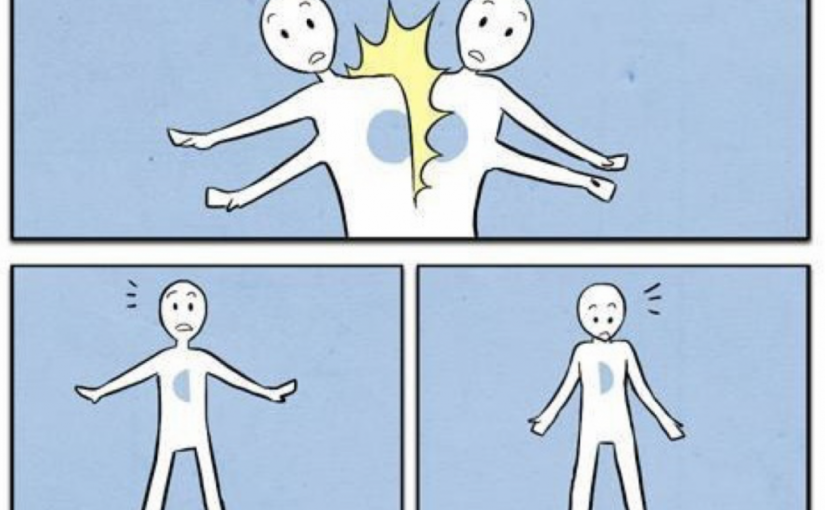 There is word that I believe is misunderstood in Buddhist practitioners – “self.”  My teacher Katagiri-Roshi used to say that there is a historic self and an absolute self (a Buddha self) in each of us and they arise together in the present moment. But somehow this seems to have been misinterpreted, it seems to me. Many practitioners prioritize the Buddha self over the karmic self as if they were two things. This creates a lot of problems. We begin to practice as if we can skip over the issues of our historic selves and just transcend humanity and become an “illuminated spiritual being” who is done with her karma. This is the basis of spiritual bypassing and the source of a lot of emotional repression, undigested psychological habits and the foundation for unexplored reactive behavior.

Does that lead to freedom? I think not. How can we be free unless we have deeply digested and released the stories and conditions that have made us who we are? We have to go through our historic karma, not just “let it go.” There is a lot of “grist for the mill” in deeply honoring and digesting our conditioning, in order to find a centered and content spiritual stability. There is a time for release, letting go and forgiveness but I suggest that we not do that pre-maturely before we have deeply investigated the pain of being human and the causes of our particular sufferings. We learn through practice how to pivot our consciousness right in the midst of it.

I wanted “self-acceptance” to be in the sub-title of my new book and a Buddhist friend said, “Oh you can’t say “self” in a Buddhist book, because, you know, there is no ‘self’.” My eyes roll. Here is an example of this over-attachment to the absolute which disregards this very being showing herself right now. Albeit there is no centralized self; there is no solid self, and yet, there is a being with a lot of conditioning that is arising in this very moment. That being deserves acknowledgement, care and understanding. Erasure isn’t non-being. Non-being is deeply understanding interdependence, the ever-changing nature of the self, and cause and effect. I understand self, in this present moment, as a great expression of all the non-self elements that made this being. All the history, personal and inter-generational that combine to become, at this moment in time, this unique expression. This person arises simultaneously with the universal energy of life which is always present and always, unconditionally, supporting right now.

What was a self anyway, when the Buddhist doctrines were made, a 1000 or more years ago?  What does the same word “self” mean in the context of a modern Western person after Freud brought forth the unconscious self in the late 1800’s.  Can we practice in the same way as our ancestors did when our consciousness has been so altered by our mental and societal constructs?

Here is an example of the problems with translation.  When Freud was translated into English, the translator would not use the simple word “I”, which is what Freud used in German.  This choice was made by James Strachey who was Freud’s translator.  He began using the word ego which was a Greek word and in that choice, he produced an odd type of distance between “I” and ego.

Mikki Kastan who is a Non Violent Communication teacher wrote this remarkable paragraph which has supported my understanding that having a human self with its desires and needs is not “bad.” Desire has been pronounced “bad” in an unsophisticated understanding of the Four Noble Truths, and has been the ongoing supposition of Buddhists for centuries. This original seed of conditioned theology was the admonition and encouragement to get off of The Wheel of Birth and Death and to become a non-returner. Now, I know, Zen is Mahayana, and this teaching was one of the reason for the change of viewpoints, but, I believe, the waft of that original teaching is still with us. It is a Buddhism that suggests antagonism towards our human life and human desires. Mikki Kastan writes:

When translation of Eastern texts also use the same word, it has become a mainstay, ubiquitous. “Ego” is now fully something to avoid, to work to free ourselves from. It interferes with our higher sense of well-being, gets in the way of generosity, and keeps us focused on desires that are generally seen as “narcissistic,” such as recognition or being seen.

Another time I remember another person talking, disparagingly, about narcissistic needs. When I pressed on her for clarity, she named needs such as to be seen, for recognition, or to be loved. I wanted to weep when I heard her. These are precisely the kind of needs that are core and central to our capacity to know that we matter and are part of the human fabric. To the extent that we relegate them to “ego” and call them “narcissistic,” we continue to put forth the idea that there is something wrong with wanting love, for example. Perhaps we even reinforce a notion of separation between self and others.

Those of us who talk in this way in Buddhist’s circles are criticized as being “too psychological” and that we are preaching exactly what we should be letting go of. The crazy blow-ups at Buddhist centers, the sexual mis-conduct, the power struggles, are exactly caused from this lack of understanding of historic self, and not knowing how to get our primary human needs met, which is not taught, at least in the Zen Centers I am familiar with.

What I have found is that a combination of understanding- how I can meet my human needs, and the profound understanding of interdependence that comes from meditation and studying Buddhism, are both needed to be free and what a glorious wholeness, peace, and freedom it is.