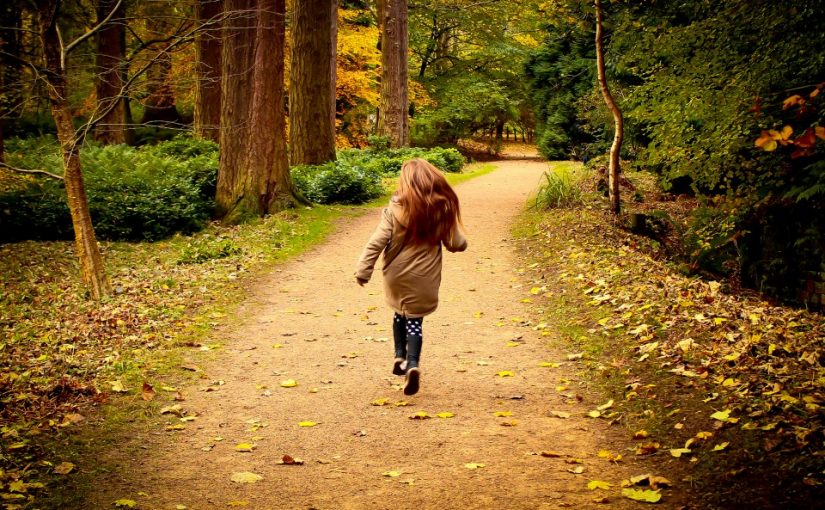 There is a child of a certain family. This child is not fully endowed with the six sense organs, and his seventh consciousness does not function completely….”

Jingyin Kumu was a very important teacher in the 10th and 11th century.  The translation of his name means “dead tree”.  I smile at that because there was quite a long period of time when the object of my meditation was “be like a dead tree.”  What does that mean?  For me, my concentration was focused on cutting off from the sense gates so thoroughly that you can enter into a very deep sense of silence and stillness.  You are not distracted even by sense objects.

Mindfulness has two aspects.  One is fully being present and mindful of the objects of the sense gates which awaken and acknowledge what is happening in the present moment.  The second aspect of mindfulness  is the opposite – not being attached at all to the object of the sense gates and actually interrupting the connection between organ and consciousness.  This is a very deep understanding of “mu” or “negation”. The explanation from the teacher, “dead tree,” continues by saying that there is a child of a certain family who demonstrates that his consciousness isn’t fully functioning.  On first reading, one might assume that this child is a real child with some mental disability.  However, Okumura Roshi suggests that this is a child like a bodhisattva in the families of the buddha.  This child has gone beyond the six sense organs and therefore, the 7th consciousness doesn’t function completely – doesn’t circulate all circumstances around an “I”.  There is a discernment in the translation of this – does this mean the seven consciousnesses do not function well or does this mean the 7th consciousness, the Manas “I” consciousness doesn’t function well.  Okumura Roshi has decided to use the second interpretation. 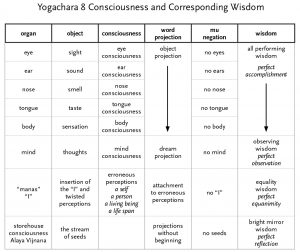 The first column are the organs of consciousness – eye, ear, nose, tongue, body and the Buddhist’s add mind.  This mind is just the organ of the brain which excretes the object of a “thought”.  This mind doesn’t put things together yet.  It is treated as a sense gate.  Each organ has an object – sight, sound, smell, taste, sensation and thought and each organ has a corresponding mind consciousness that registered the object.

Word projection is the beginning of our mind organizing our thought often called “formation” in the five skandhas, leading to all our stories about the world and our senses.  Formation is the precursor of our complicated consciousness.  The Mind organ’s projection is called ‘dream projection’ which is interesting because these fantasies don’t have a root in concrete external sense objects like the other sense gates.

Taken from the Lankavatara Sutra, I added the column of the word projections and the last column of the corresponding Wisdoms.  I very much appreciate adding the last column.  That is how you come back from emptiness, returning into form and daily life.  Your action in daily life is the expression of one of the wisdoms.  This suggests the pictorial depiction of the person walking with open arms in the market place which is shown as the last of the 10 ox-herding pictures.  When your five skandhas has been cleared of history and attachment, you use your “self” for the benefit of life and others.  Freely and openly without a hitch.  All the five sense gates of concrete objects become all-performing wisdom or perfect accomplishment.  The Mind sense gate, always slightly different, becomes observing wisdom or perfect observation.

The last two consciousnesses are distinctive and more complicated.  The 7th consciousness is called the Manas consciousness.  It is our discriminating consciousness that takes all the other consciousness and twists them around so that they have the illusion of encompassing a centralized, solid “I”.  Sometimes it is called ego-consciousness.   This child as it says in the text doesn’t have a fully functioning “I”.  Our practice has matured enough that we are no longer twisting all of our perception and making a solid “I”.  The Manas consciousness can be untwisted through practice!  We become non-attached to the erroneous perceptions and start to function with equality wisdom or perfect equanimity.  All things are appreciated for themselves, and go beyond the reflection of what this object or event may or may not do for ME.

Finally, this practitioner is a person free from the hook of the attachment to sense gates and their desires.  This is a person free from ego-centric clinging.  This produces a type of innocence and playfulness often described as a person free to live in the present moment, unencumbered by the bondage of “self”. This can have a child-like presence.  I sometimes think of certain Zen Teachers who were very improvisational and not bound by rules.  One example of this is the late Zen Teacher Kobun Chino.  His stories of freedom and improvisation are like a child of a certain family of buddhas.  Or we can look at the brilliance of young children who instinctively know presence. Because there is no pretensions or concepts, this immediacy is called “going beyond buddha.”