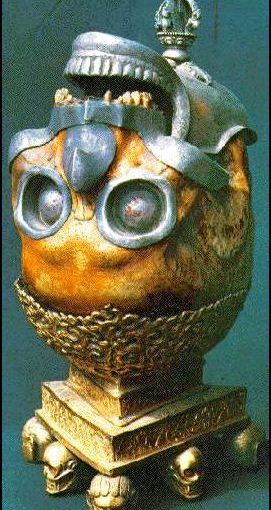 What unusual images of interrupting the connection between the sense organ, sense object and the sense consciousness that Dogen is describing.  He suggests replacing our sense organs with insentient objects and therefore, our discriminating mind comes to a halt.  Instead of a meditator’s skull becoming the primary and central place of the “I” and our discriminative thinking,  the skull is used to become a scoop to clean up the outhouses!  Those concepts, ideas and unique thoughts of ours become shit that has to be ladled out and cleaned up!  Oh, Dogen can be so funny.

A child of a certain family is a reference to the importance of your ancestry in China and Japan.  Your life is predetermined by who your family was.  The social classes rarely overlapped.  Your life’s destiny is associated with what family you come from.  “This child” is a satirical poke at the highfalutin, scholarly monks of Dogen’s time.  He is saying all you need is the innocence of a child not the education of a scholar to see the truth.  Is this child a child of the Buddha family?  Dogen writes “This child is a great icchantika and lacks buddha-gotra.”  Oh, here again, Dogen flips everything upside-down.  The Icchantika in most Buddhist history is a person so deluded and so full of deception, that they entirely lack buddha-nature and can never become a buddha.  But here Dogen is using, this person whose 7th consciousness is not fully functioning, positively.  He is equating this type of non-buddha with the non-buddha who goes beyond the constrictors of ordinary life.   He again twists everything around and says this child is not from the buddha-gotra, the family of the buddhas, who are assured of becoming Buddha.  This child in their non-thinking are beyond the defiled, the icchantika, or the exalted, the family of the buddha.  Dogen continues by saying , “The heavenly palace is not able to accommodate her; hell has no gate to take her inside.”   Neither high nor low is distinguished in this child’s mind.  This is going beyond buddha.

The next section is also a clever turn-around of language.  Dogen refers to a famous poem by Joshua again and then he makes a tiny, little tweak of language to make his point of going beyond.

Here is Joshu’s poem.  This poem is really beautiful about the Buddha idols made of wood, gold, and clay which are not the true Buddha because they can be destroyed by fire, a furnace and water.

A wood Buddha does not pass through fire

A golden Buddha does not pass through the furnace

A clay Buddha does not pass through water

A true Buddha sits in silence.

Dogen alters this by saying:

Adding on to Joshu’s interpretation, Dogen says that the true buddha is formed by the exact dissolution of the substances and the transformation that happens into nothingness.  He uses the words “after passing through” the furnace, the great ocean, and the flames. Only after these Buddha’s dissolve, do we see the true buddha.  The true buddha in both versions sits in silence but there is a subtle and beautiful turn around made by Dogen that adds another layer to Joshu’s famous poem.